I liked the light in these photos, taken at Laguna Madre Bay near Port Isabel, Texas on a cloudy day. 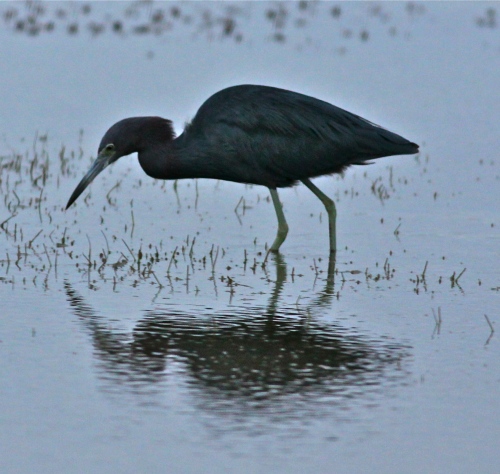 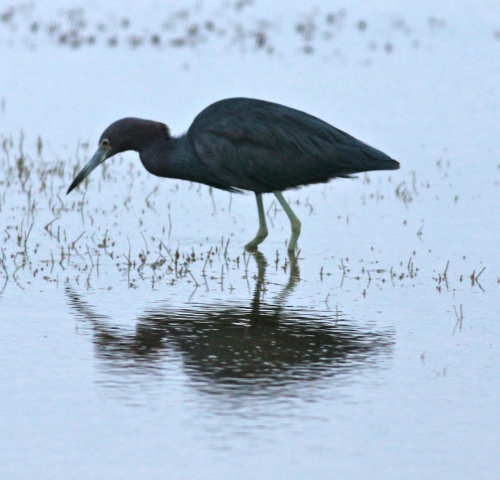 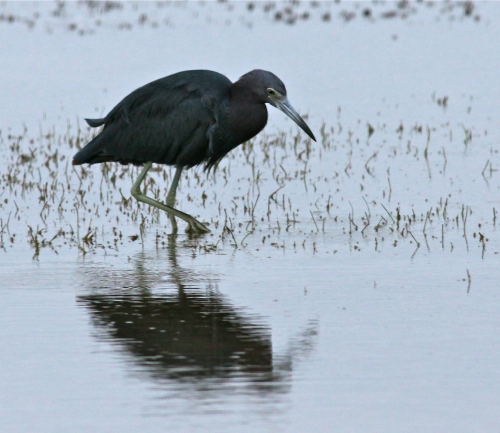 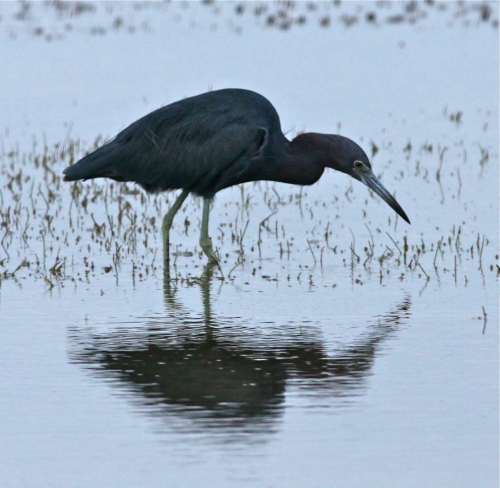 A highlight of my trip to South Texas for the Rio Grande Valley Birding Festival was a pontoon boat trip on Laguna Madre Bay with Scarlet Colley of the The South Padre Island Dolphin Research and Nature Center. We arrived at the dock in Port Isabel just at sunrise on a cloudy morning.

Six of us boarded the pontoon boat with Scarlet and Dan Jones, an excellent local birding guide.

As we cruised slowly around the harbor, Brown Pelicans seemed to be everywhere.

Black-necked Stilts waded in the shallows.

A Great Blue Heron was fishing in the harbor…

… and a Common Tern hunted overhead. 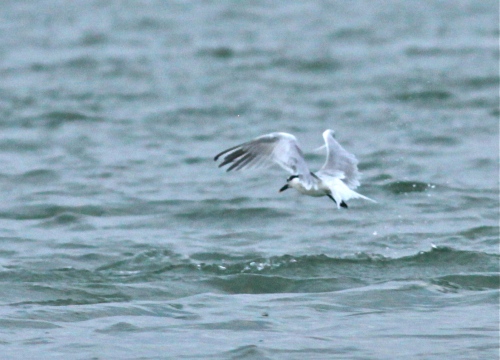 Black Skimmers were resting on the sand bars, occasionally making forays out over the bay.

Once we were out on the bay, we saw many wading birds: 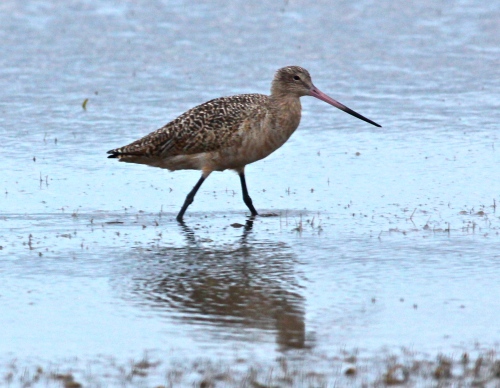 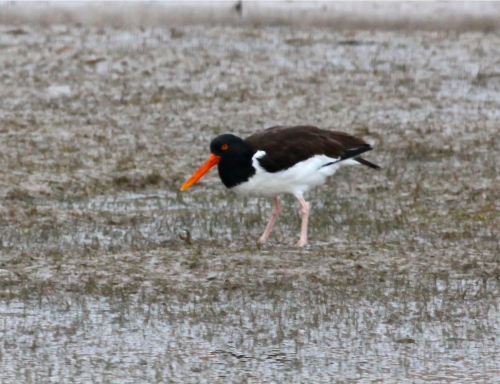 I am always excited to see Roseate Spoonbills with their lovely pink color and prehistoric faces.

There were groups of Red Knots feeding on the sand bars in the bay.

As we headed farther out into the bay Rozzi, Scarlet’s dog, began to bark excitedly. 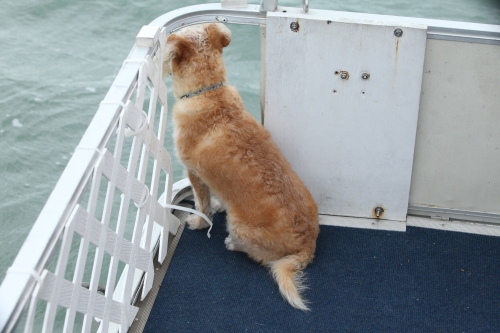 We soon saw the cause of her excitement … 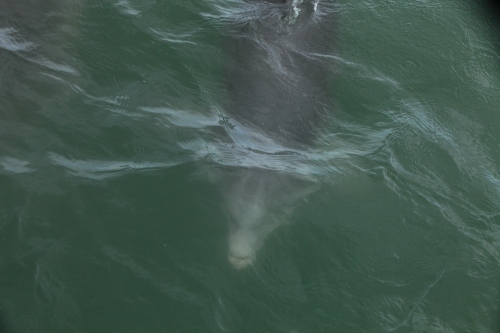 In preparation for my trip to the Rio Grande Valley Birding Festival I had signed up for a couple of birding trips. While I am not a fan of large bus birding I was excited about attending Better Birding with Jon Dunn, especially when I learned that the trip would be in a small van along with local knowledgeable birder Dan Jones.

We loaded into the vans early in the morning. I was amazed at how quickly Jon and Dan spotted birds, and how accurately they were able to accurately identify birds that to me looked like little more than distant dots.

Our first stop was the Valley Land Fund Migratory Bird Sanctuary, which is a very small area of six wooded lots in a residential area. South Padre Island is a crucial first landfall for birds making the arduous cross-Gulf migration from Southern Mexico and northern Central America. Especially after a spring storm, wooded lots on the island can produce a surprising number of warblers, tanagers, orioles and thrushes. We saw quite a few birds in this tiny area.

When we arrived at the South Padre Island Convention Center, everyone was excited about the recent sighting of a Fox Sparrow, which was very unusual for the area. In fact, I believe that it was a record sighting for the island. I wondered if I should just give up and go back to the van. I have a very difficult time distinguishing various types of sparrows. They tend to all look like small brown birds to me. Jon and Dan were very happy and enthusiastic about the outing, and catching their enthusiasm I adjusted my attitude and happily accompanied them to see if I could recognize anything.

Jon Dunn points out a bird to interested birders.

I had no problem recognizing a number of birds: 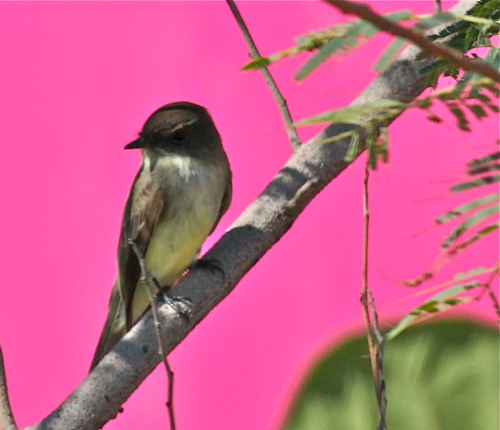 Gray Catbird hiding in the understory.

I saw birds that were new to me as well.

And yes, there were sparrows. I consulted my notes, my books and my ebooks, and I still have a great deal of difficulty differentiating sparrows. Jon Dunn and Dan Jones were very patient in pointing out the differences among sparrows. Perhaps I am hopeless. I make the following identifications with great trepidation. Please feel free to offer corrections. 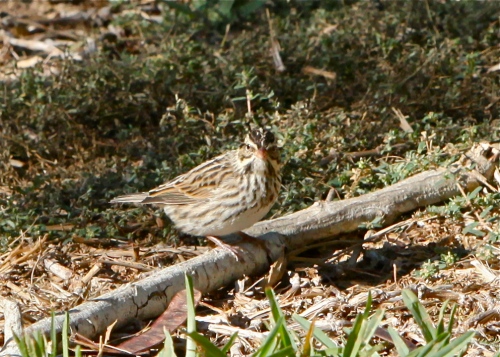 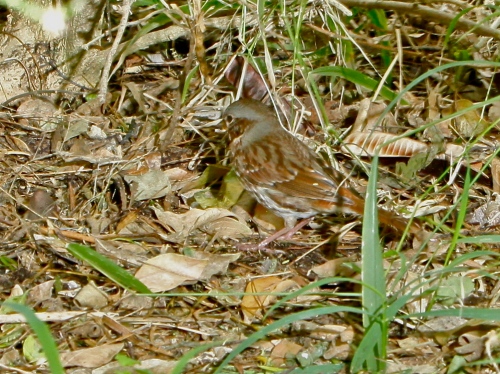 The Fox Sparrow about which everyone was so excited. 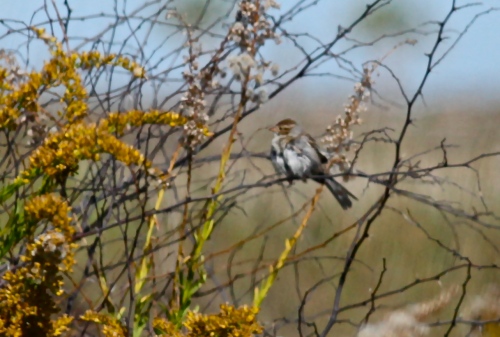 After a fun day of birding, I paused at the SPI Convention Center to admire a beautiful Monarch Butterfly.

It was a lovely day, and it was a treat to go out with such knowledgeable and informative birders. I believe that I learned a little something about sparrow identification. The next day, however, would bring new challenges. I would go in search of shorebirds.

Those of you who know me know that I am not a “lister.” Because I was riding shotgun in the birding van, I was assigned to keep a list for the day, which you will see below. You will note that my post contains nothing about the shorebirds that we saw that day. Watch this space… 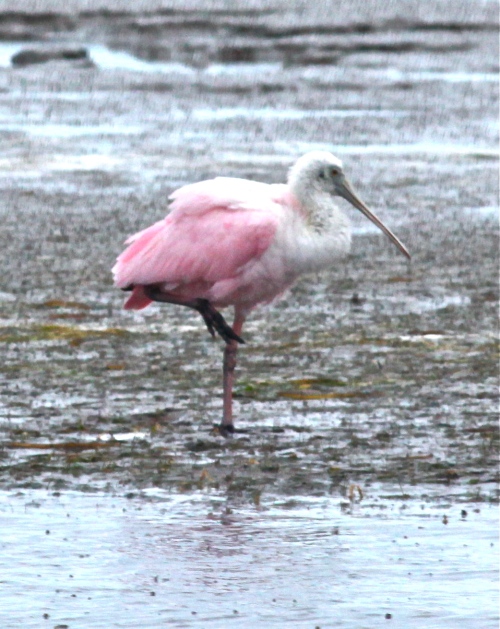 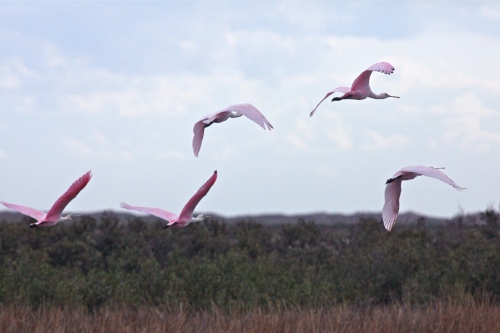 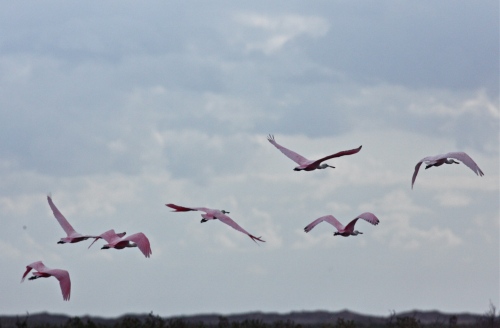 After my first day at the Rio Grande Valley Birding Festival I could hardly wait to get up the next morning and do more birding. The morning was cloudy and windy as a front was moving through the area. Nevertheless I was excited to set off for Laguna Atascosa National Wildlife Refuge.

On the way to the refuge I saw two Aplomado Falcons, but both of them had flown by the time that I was able to stop my rental car. I certainly wish I had taken this photo. They are truly lovely birds! 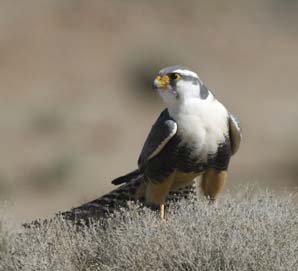 When I arrived at the Visitor’s Center I was delighted to see many residents at the feeding stations and the water feature. These are birds seen only in South Texas. 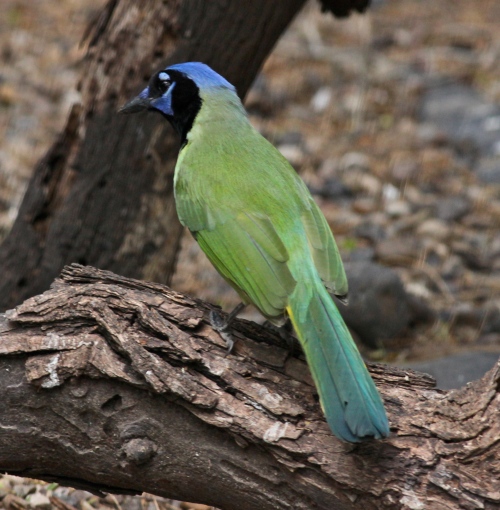 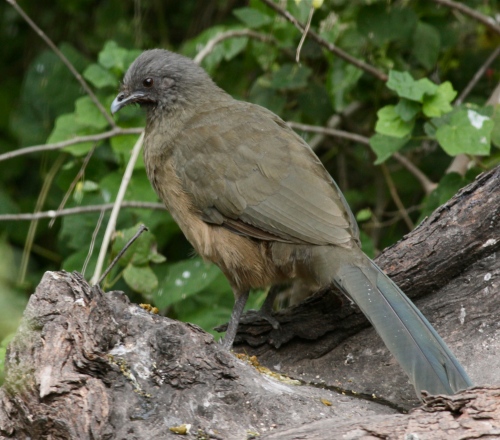 These are birds that you will not see unless you travel to South Texas. If you would like to see them without traveling to Texas, Sabal Palm Audubon Sanctuary has a very nice webcam so that people can see these beautiful birds.

I am including this next bird because although it is a common bird for people in the Eastern half of the U.S., New Mexicans and most Westerners do not see this beautiful bird.

The birds suddenly fled, and I looked for the cause of their disturbance. I finally spotted a small coyote in the underbrush, as wary of me as the birds had been of it. The coyote was quite small compared to the ones that I am accustomed to seeing in New Mexico.

I drove the fifteen mile Bayside Drive loop, which runs for a significant distance along Laguna Madre, the bay between the mainland and South Padre Island. The scenery was interesting as desert scrub-type vegetation grows right to the water’s edge.

As I looked out over the bay, a Caspian Tern hunted overhead.

A Great Blue Heron fished in the shallow water near the shore.

I looked up and saw an Osprey with a fish, flying overhead. It was almost beyond the range of my lens …

… but I was able to get a much better look when it landed on the shore. 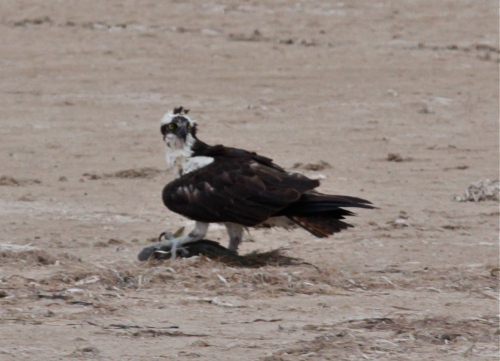 Osprey on the shore with fish.

I continued along Bayside Drive and watched Egrets fishing in the shallow water of Laguna Madre Bay. 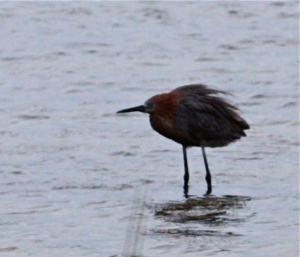 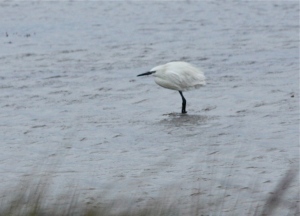 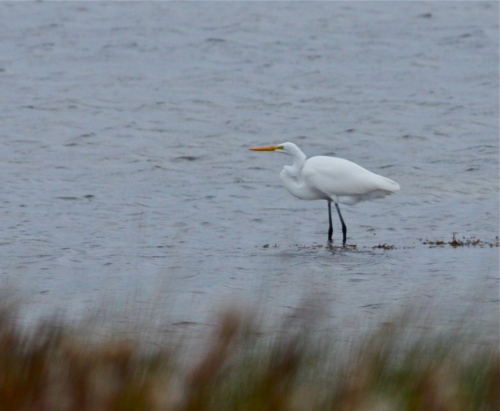 Here is a short video of shorebirds feeding along the edge of Laguna Madre Bay:

When I came to the end of Bayside Drive I saw a gorgeous Harris Hawk sitting on a post. It was kind enough to post for several photos. 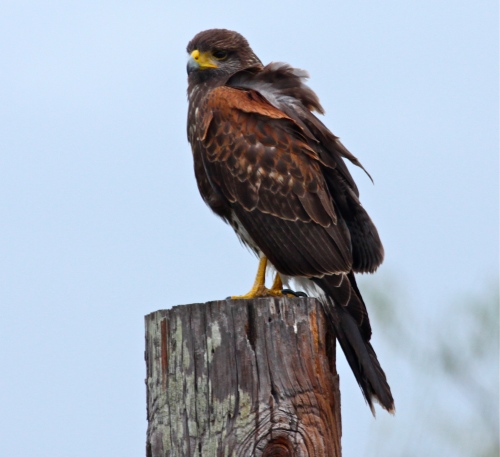 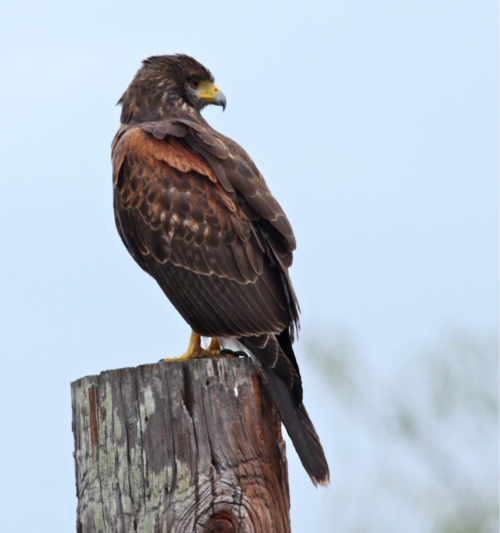 As I left Laguna Atascosa National Wildlife Refuge, I saw a Crested Caracara flying toward me. I was quicker than I had been with the Aplomado Falcon, and I was able to get a photograph.

I thoroughly enjoyed my day at Laguna Atascosa. The next day would bring new challenges involving shorebird and sparrow identification, two of my weaknesses.